Over the course of this project I learned a lot not only about how Defold works but about how to effectively create a game for competitions. In this blog post I’m going to share some of my findings as well as review every project I made.

Every one of these games was submitted to at least one game jam. A game jam is a video game development competition where you are given a set amount of time plus a theme and have to make a project during that time.

This project was moderately successful, gaining 4,891 views, 2,833 plays, and 136 downloads. For a series of free games hosted on itch, with basically no additional marketing, I feel these are good numbers.

Here are a few of my personal favorites if you would like to try them out: 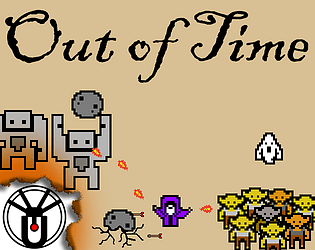 Concept: You are slowly dying and must kill enemies to regain health.

“Out of Time” was a strong start for the series, getting 54th out of 1,073 in the overall category for the jam I entered it into. It was briefly featured in the background of the ‘best of’ video by the jam creator. These results gave me a solid footing and confidence for the future.

Take away: Graphics aren’t everything in a jam, what matters is consistency. 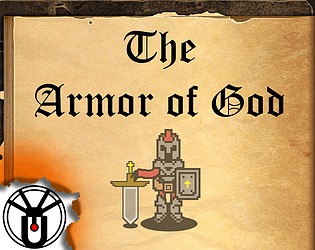 Sometimes inspiration can strike from unexpected places. Several years ago, I was in a Bible study and the Armor of God was mentioned (Ephesians 6:10-20). I instantly felt drawn to the concept as a game idea. To date this is still my favorite game on a narrative level.

Probably the craziest part of this game was that several months later I came across two other guys who made a game for a different jam also called “Armor of God” using the same free art kit and with a shockingly similar story structure. I’ve been in contact with the creators but unfortunately they use Unity :frowning: so I can’t collaborate with them directly for the time being.

People tended to enjoy this project too with it ranking 28/1,889 in terms of game design.

Take away: Experiment with uncommon game themes, it helps your game to stand out and be very memorable. 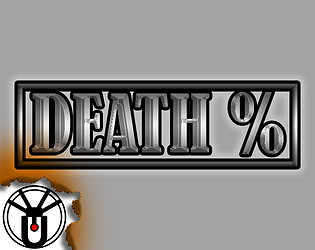 When I first released this game, I was semi-embarrassed by it. I made it in an afternoon after scrapping my original concept. It was also my first attempt at a platformer and is lacking in terms of features. It still blows my mind that this game managed to be 19th overall out of 1,018. It also placed 13th in fun, 13th in topic and 20th in terms of simplicity. Once again, visuals seriously held me back with that ranking 255. This was also my first game to get properly shouted out in a YouTube video.

I think part of the reason the game did so well was because the theme of the game was “Failure is progress”. Most people made games where you die and your body remains to aid you on the next playthrough. My twist was turning the character into a slow ghost to fly through walls. I think this was different enough that most people seriously enjoyed it because it is a unique twist on the common approach.

Take Away: Stray away from the common interpretations of a theme, a little creativity can go a long way in making a project stand out. 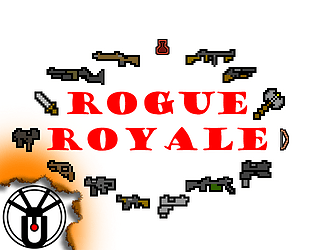 If there’s a specific game I want to revisit and redo it would be this one. A randomly generated battle-royale should have been super fun with lots of replay value. Unfortunately a bug in my custom pathfinding that I couldn’t fix during development plus not enough random generation resulted in a lack-luster experience. The narrative was also basically non-existent with people confused how this fit into the overall story. The game is also very hard in terms of gameplay and fairly buggy too. However, not all was lost. The interact system as well as the weapons system ended up being a core building block for several of the future games I created.

Take away: Know your audience.

A Name is Earned 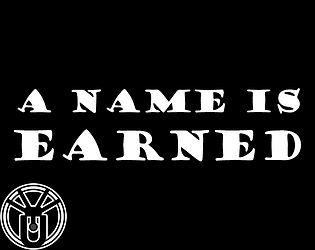 Concept: Stay super powerful as long as you can keep chaining together kills.

This was the ‘point of no return’ for me in terms of my goal of ‘12 games, 12 months, 1 story’. I had never fully linked the games together beyond some dialog and similar names / art. I needed to link it all together, so I decided to reveal a key piece of the story as a prize for winning the game.

I submitted this game to two jams, resulting in a unique experience in both.

Take away: Consistency in a color-pallet can make the game look very visually appealing. 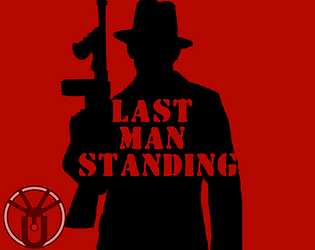 Concept: You have a magic gun that needs to be charged up before dealing massive damage to all enemies in the vicinity. You are vulnerable until the weapon is ready.

When I originally started this challenge, this was one of the first story ideas that came to mind. One man fighting against an army with nothing left to lose.

Take away #1: If you have cutscenes, provide a way to skip them.

Take away #2: Make sure concepts are well explained and logical. 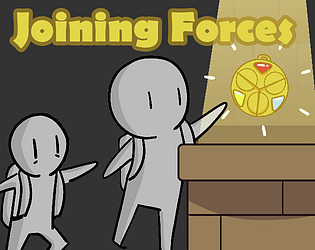 Concept: A puzzle platformer where you join and separate characters to gain new abilities.

The GMTK game jam is one of the largest of the year; last year it had over 5,700 games submitted. As a result I pulled together a large team for this.

So far in this challenge, I had avoided working with others as this was my challenge. It felt unfair for me to ask people to just go along with my ideas or help me implement an otherwise pointless feature to a project. While brainstorming ideas, I mentioned this challenge and my team was very interested in helping with it. We found a great way to compromise and this alleviated my fears about working with others for the remainder of the challenge.

This game ended up being what I consider to be my mechanically strongest game to date with lots of depth and puzzles. It ended up ranking 271 out of 5,751 overall. We think we could have placed higher but to get more eyes on the game we did something called “rate-for-rate”. ‘Rate for rate” is when you rate someone else’s game with the agreement that they would rate yours too. While this boosted numbers it dragged down the score as people would just open the game then rate it poorly. I had one guy tell me after the jam was over he saw it was a platformer and instantly gave it a 3/5 then moved on.

Take away: Rate for Rate is a double edged sword. 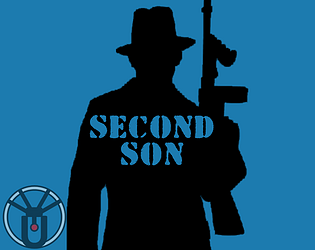 Concept: Survive an endless wave of enemies, chaining several kills results in you getting more powerful, wait too long to kill and you’ll lose your powers.

I was finally able to get my pathfinding fully working, combining that with the weapons system in “Rogue Royale” plus a large open map resulted in an excellent horde mode. This game did extremely well ranking 14th out of 1,750 games. The only downside is that the game gets brutally hard at a certain point and even I haven’t been able to 100% the game. I didn’t lock anything away behind the 100% completion of the game this time as a result.

Take away: If a game is hard for the developer, it will be impossible for a casual player. 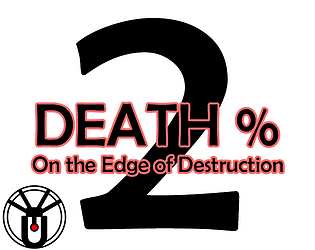 Concept: Speed runner platformer where you transform between a ghost and back into a character.

This is the first direct sequel I made during this challenge. I took some of the direct critiques of the original “Death Percent” and made it into a full game with more features, actual cutscenes and even enemies. However, the original point of the game was lost. The result was a game that wasn’t sure what it wanted to be.

At this point in the challenge, I realized I needed to start merging some of the story threads into a more coherent story. I did this through long cutscenes and learned that most people don’t like to read and can easily lose interest. 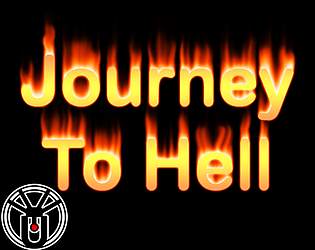 My first attempt at making a horror game. Ran into some large technical difficulties with this one. I still enjoy the atmosphere and animations I created for this project. The game feels way too long and definitely overstays its welcome.

Take away #1: Keep it short and leave people wanting more.

Take away #2: When using new functionality, do a test build before using it in production. 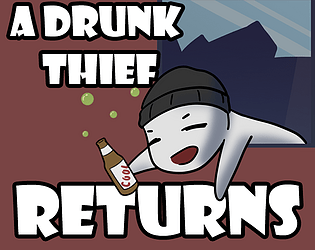 Concept: A comedy crime thriller where you drunkenly stumble around and steal a target item, take too long and the police will chase you down.

Some of you maybe already familiar with this game as it was my team’s entry to the Defold x Yandex Jam last year.

Clocking in at a little over a month and a half, this game was the longest game in terms of development time that I had released. I pulled together the same team as from Joining Forces and we decided to remaster a game from 2020 (A Drunk Thief) and give it more functionality. The team has talked a lot about turning this game into a full mobile game but have no concrete plans for that yet. This is currently my second most played game just behind the original Drunk Thief and is responsible for over 1/5 of all views this challenge has.

Take away: Clearly define why you are doing a jam. 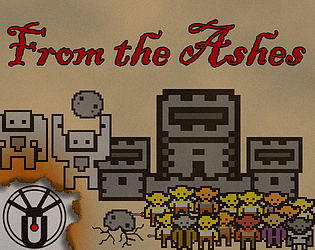 Concept: Top down shooter where you swap between different characters to complete different puzzles.

As the last game in the challenge I had to tie up several loose ends and provide a satisfying end to the story at large. I feel like I largely accomplished that with this game. I took the lessons I learned over the year and made a game I enjoy playing. It tells a tight narrative and fills in most of the holes in the larger story.

That being said I was unable to concretely link the two main storylines of the game, but I always have the future for that. This game was meant to come out in December of 2021 but do to the holidays and general burn-out from making 11 games in a row it ended up coming out on the 365th day of the challenge.

Take away: Make sure to have fun.

If I could do it again

If I was to re-do this challenge (which I am not planning on doing), I would do a few things very differently.

Firstly, I would establish more of a concrete story early.

Secondly, I would have announced it earlier.

Thirdly, I would spaced them out more.

Thank you for taking the time to read this! Hope you have a wonderful day!