A collision object component has a set of Properties that sets its type and physics properties. It also contains one or more Shapes that define the whole shape of the physics object.

To add a collision object component to a game object: 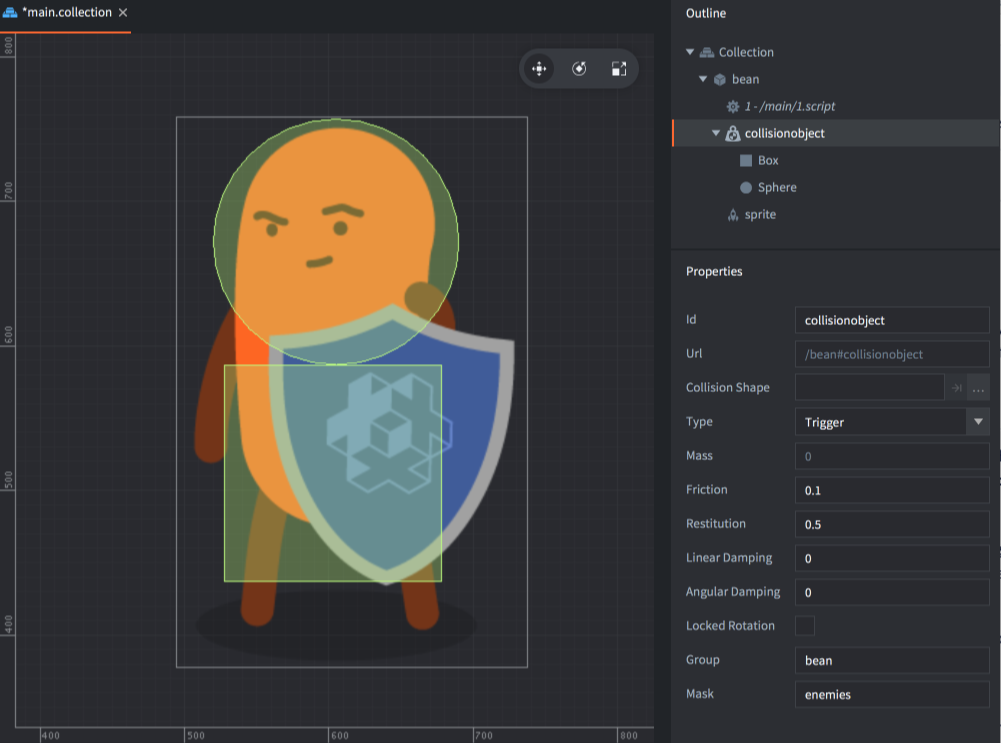 Id
The identity of the component.
Collision Shape
This property is used for tile map geometry that does not use ordinary primitive shapes. See below for more information.
Type
The type of collision object: Dynamic, Kinematic, Static or Trigger. If you set the object to dynamic you must set the Mass property to a non zero value. For dynamic or static objects you should also check that the Friction and Restitution values are good for your use-case.
Friction
Friction makes it possible for objects to slide realistically against each other. The friction value is usually set between 0 (no friction at all—a very slippery object) and 1 (strong friction—an abrasive object). However, any positive value is valid.

The friction strength is proportional to the normal force (this is called Coulomb friction). When the friction force is computed between two shapes (A and B), the friction values of both objects are combined by the geometric mean:

This means that if one of the objects has zero friction then the contact between them will have zero friction.

Restitution values between two shapes (A and B) are combined using the following formula:

When a shape develops multiple contacts, restitution is simulated approximately because Box2D uses an iterative solver. Box2D also uses inelastic collisions when the collision velocity is small to prevent bounce-jitter

Linear damping
Linear damping reduces the linear velocity of the body. It is different from friction, which only occurs during contact, and can be used to give objects a floaty appearance, like they are moving through something thicker than air. Valid values are between 0 and 1.

Angular damping
Angular damping works like linear damping but reduces the angular velocity of the body. Valid values are between 0 and 1.
Locked rotation
Setting this property totally disables rotation on the collision object, no matter what forces are brought to it.
Group
The name of the collison group the object should belong to. You can have 16 different groups and you name them as you see fit for your game. For example “players”, “bullets”, “enemies” and “world”. If the Collision Shape is set to a tile map, this field is not used but the groups names are taken from the tile source.
Mask
The other groups this object should collide with. You can name one group or specify multiple groups in a comma separated list. If you leave the Mask field empty, the object will not collide with anything.

A box has a position, rotation and dimensions (width, height and depth): 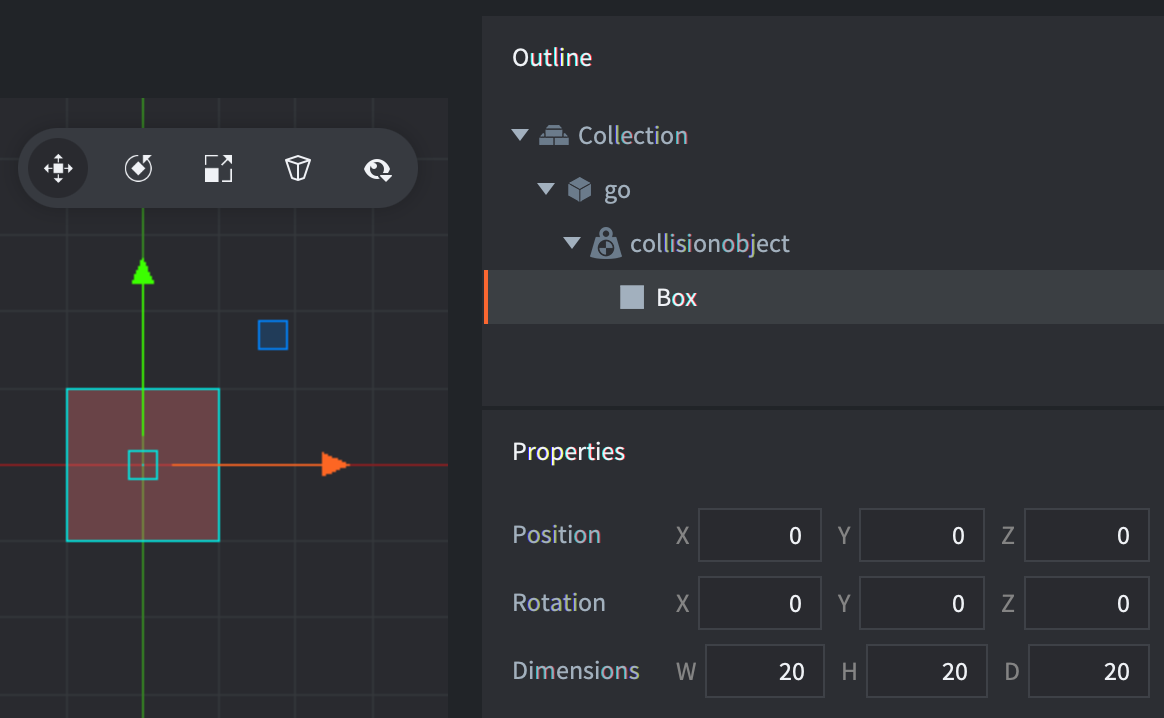 A sphere has a position, rotation and diameter: 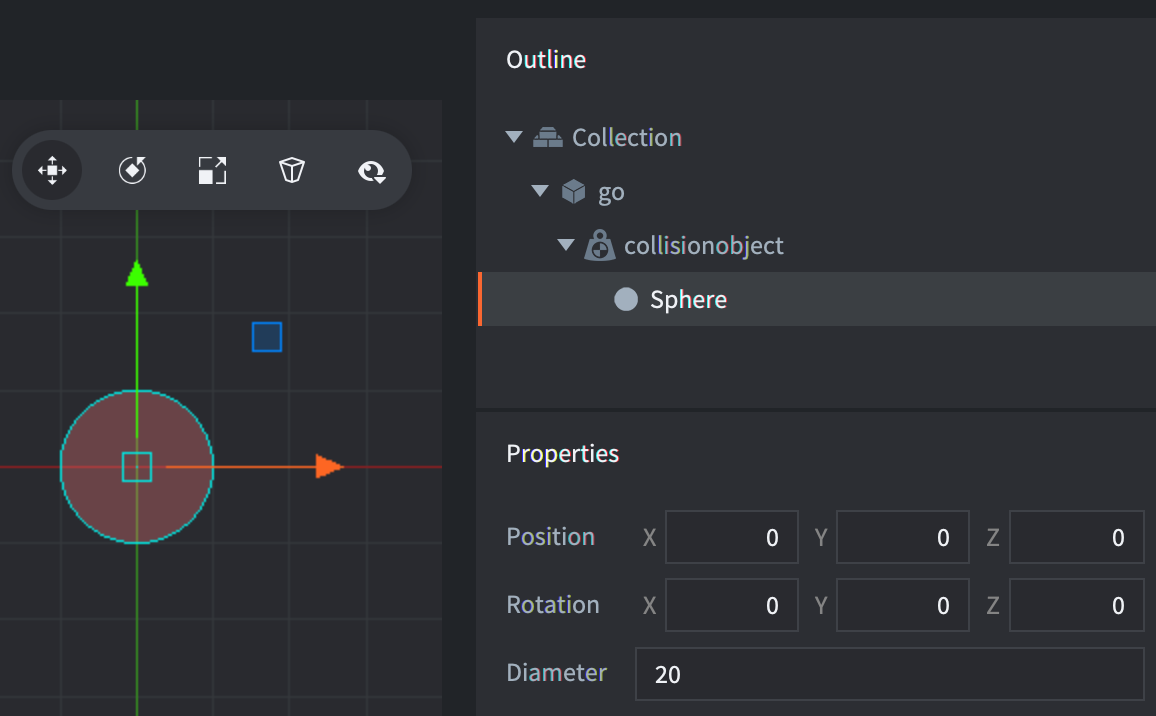 A capsule has a position, rotation, diameter and height: 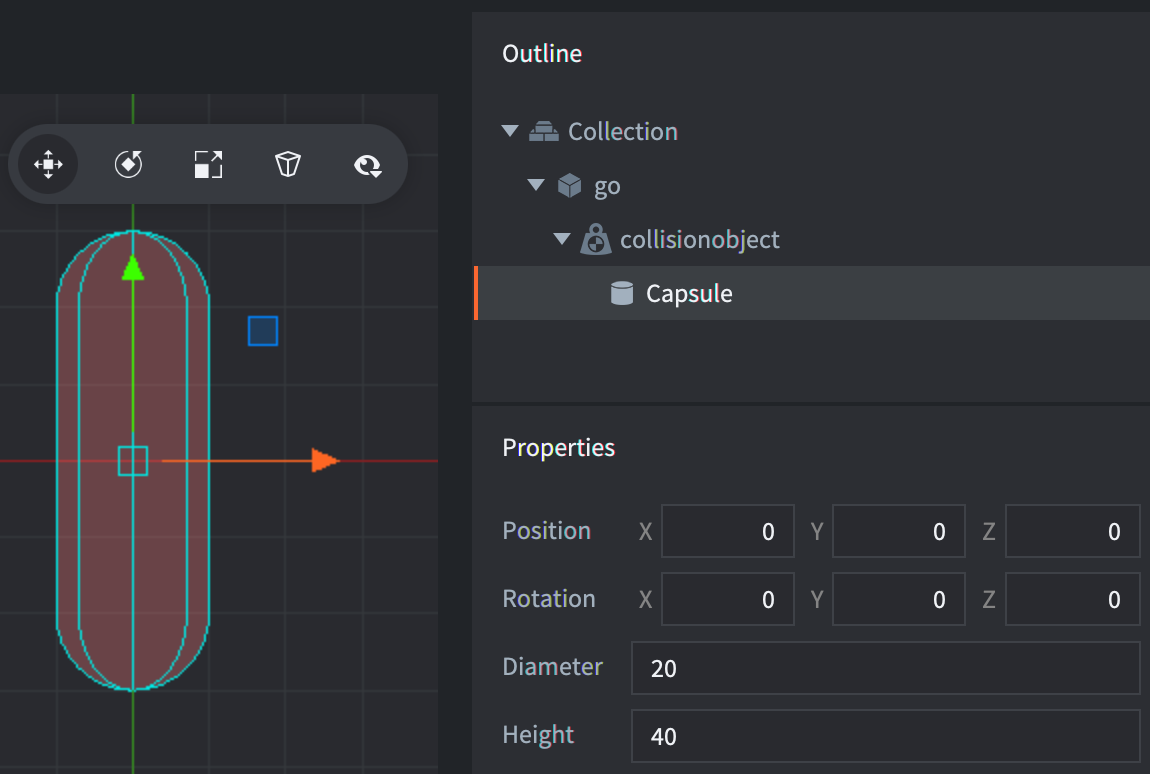 Defold includes a feature allowing you to easily generate physics shapes for a tile map. The Tilemap manual explains how to add collision groups to a tile source and assign tiles to collision groups (example).

To add collision to a tile map: 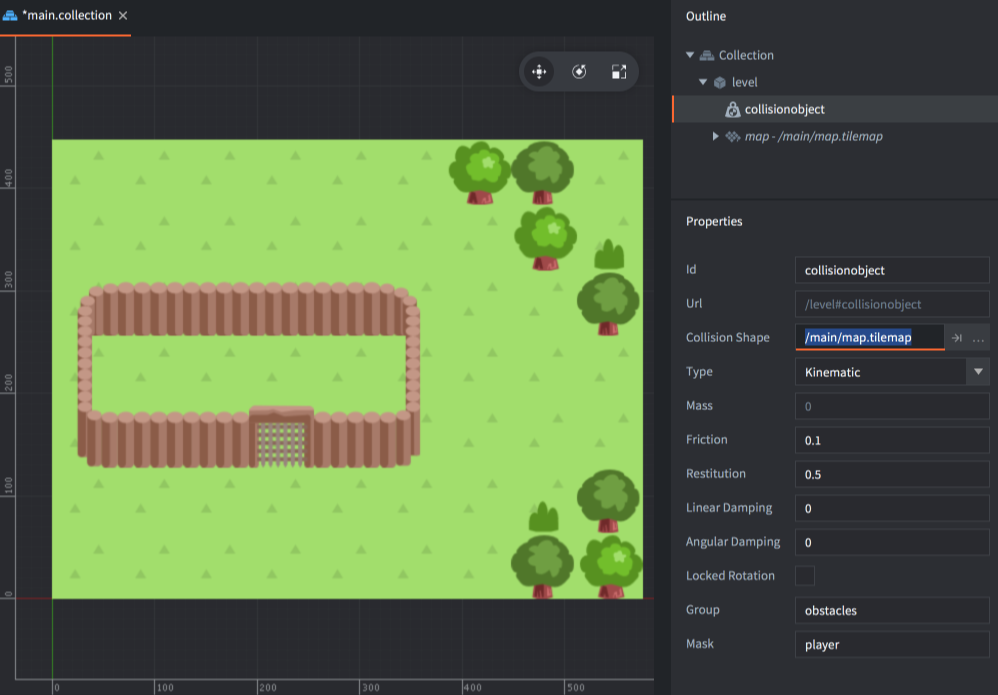 Note that the Group property is not used here since the collision groups are defined in the tile map’s tile source.

The shape will not be drawn in the editor. You can enable Physics debugging at runtime to see the shape.

The physics engine simulates Newtonian physics and it is designed to work well with meters, kilograms and seconds (MKS) units. Furthermore, the physics engine is tuned to work well with moving objects of a size in the 0.1 to 10 meters range (static objects can be larger) and by default the engine treats 1 unit (pixel) as 1 meter. This conversion between pixels and meters is convenient on a simulation level, but from a game creation perspective it isn’t very useful. With default settings a collision shape with a size of 200 pixels would be treated as having a size of 200 meters which is well outside of the recommended range, at least for a moving object. In general it is required that the physics simulation is scaled for it to work well with the typical size of objects in a game. The scale of the physics simulation can be changed in game.project via the physics scale setting. Setting this value to for instance 0.02 would mean that 200 pixels would be treated as a 4 meters. Do note that the gravity (also changed in game.project) has to be increased to accommodate for the change in scale.

The physics engine allows you to group your physics objects and filter how they should collide. This is handled by named collision groups. For each collision object you create two properties control how the object collides with other objects, Group and Mask.

For a collision between two objects to register both objects must mutually specify each other’s groups in their Mask field. 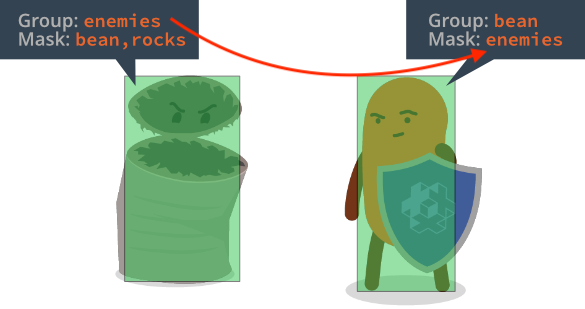 When two objects collide, the engine will broadcast messages to all components in both objects:

This message is sent for all collision objects. It has the following fields set:

The collision_response message is only adequate to resolve collisions where you don’t need any details on the actual intersection of the objects, for example if you want to detect if a bullet hits an enemy. There is only one of these messages sent for any colliding pair of objects each frame.

This message is sent when one of the colliding objects is dynamic or kinematic. It has the following fields set:

Triggers are light weight collision objects. Thay are similar to ray casts in that they read the physics world as opposed to interacting with it.

other_id
the id of the instance the collision object collided with (hash).
enter
true if the interaction was an entry into the trigger, false if it was an exit. (boolean).

Ray casts are used to read the physics world along a linear ray. To cast a ray into the physics world, you provide a start and end position as well as a set of collision groups to test against.

If the ray hits a physics object you will get information about the object it hit. Rays intersect with dynamic, kinematic and static objects. They do not interact with triggers.

Using kinematic collision objects require you to resolve collisions yourself and move the objects as a reaction. A naive implementation of separating two colliding objects looks like this:

This code will separate your kinematic object from other physics object it penetrates, but the separation often overshoots and you will see jitter in many cases. To understand the problem better, consider the following case where a player character has collided with two objects, A and B: 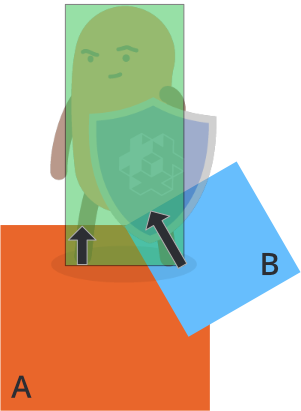 The physics engine will send multiple "contact_point_response" message, one for object A and one for object B the frame the collision occurs. If you move the character in response to each penetration, as in the naive code above, the resulting separation would be:

The order of these is arbitrary but the result is the same either way: a total separation that is the sum of the individual penetration vectors: 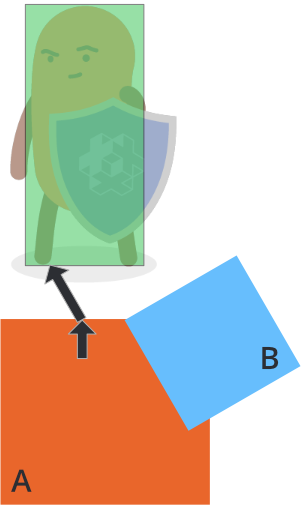 To properly separate the character from objects A and B, you need to handle each contact point’s penetration distance and check if any previous separations have already, wholly or partially, solved the separation.

Suppose that the first contact point message comes from object A and that you move the character out by A’s penetration vector: 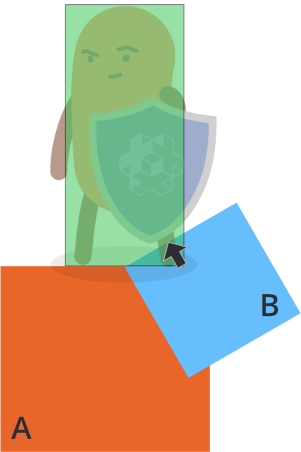 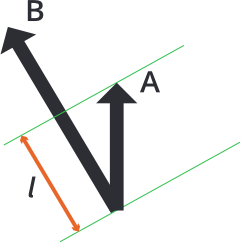 The compensation vector can be found by reducing the length of B by l. To calculate this for an arbitrary number of penetrations, you can accumulate the necessary correction in a vector by, for each contact point, and starting with a zero length correction vector:

Joints can currently only be created programmatically using physics.create_joint():

Editor support for creating joints is planned but no release date has been decided.

A joint can be destroyed using physics.destroy_joint():

Reading from and Updating joints

Get joint reaction force and torque

Collection proxies
Through collection proxies it is possible to load more than one top level collection, or game world into the engine. When doing so it is important to know that each top level collection is a separate physical world. Physics interactions (collisions, triggers, ray-casts) only happen between objects belonging to the same world. So even if the collision objects from two worlds visually sits right on top of each other, there cannot be any physics interaction between them.
Collisions not detected
If you have problems with collisions not being handled or detected properly then make sure to read up on physics debugging in the Debugging manual.